The same people who think playing vinyl is like flyfishing. Here's why...

I’ve probably mentioned one too many times what a hapless record store junkie I am and how my fixation with music once got to the point where it was all about the buzz of shopping — retail therapy — and acquiring CDs and records when perhaps it should have been about experiencing it.
I’m better now thankfully. It’s been years since I’ve purchased music by the kilo and what was once an incessant preoccupation now resembles nothing more than a serious hobby (I hope). Yet even after that big reality check there’s an aspect to the pursuit of music collecting that never fails to set my heart racing: the thrill of getting my hands on vinyl records.
Whether it’s flicking through a dusty op shop (even if 93 per cent of op shop records consist exclusively of Kamahl, Gilbert & Sullivan and Scottish bagpipe waltzes), gazing longingly at the rock and metal picture discs at my favourite record store, or expectantly unpacking a pizza box-sized package in the mail, there’s something about these thin pieces of round plastic that just keeps me coming back for more. 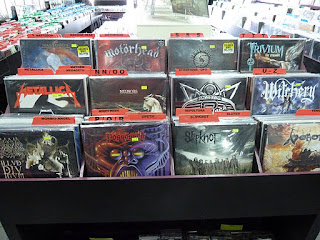 I want all of them! Except maybe the new Morbid Angel at the front left.

And yet, vinyl records must surely be an anachronism in this day and age.
The photo below was taken after I spent money on three records (this one, this one and this one, all from noise-x-change). Yet I could have so easily downloaded or purchased the same tracks for considerably less. I got a grand total of eight tracks for my money yet I’m limited to a large and bulky setup that involves a turntable, speakers, an amp, and of course somewhere to store the damn things. With a download (legitimate or otherwise) I could have enjoyed this music far more often, in the order I choose, on my portable media player. 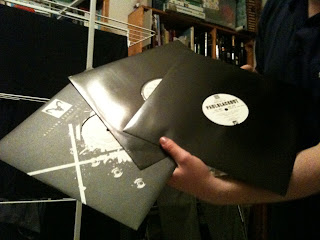 I’ll preface this by saying that once upon a time I fantasised about DJing hard-hitting, balls in your face electronic music in clubs and suspicious abandoned buildings. I bought dozens of records but the closest I got was my bedroom with me as the crowd (although I did once manage to play track B1 on this Nasenbluten album to a bunch of goths). Yeah, I had some semi-serious aspirations — for one thing it looked like sooo much fun. And while that dream has long since faded, it didn’t stop me from attempting to practice my DJ skills (or total lack thereof) on the two turntables I acquired.
Anyway. Having said that, I have a theory about why I believe people still think vinyl records are wonderful — and it has nothing to do with what the posers claim is the superiority of analogue sound. Yes, if you have a perfectly balanced stereo that’s connected to an equally refined stylus that happens to be playing in a room with excellent acoustics then chances are you probably can pick a mild, ‘warmer’ difference to the sound.
On the other hand, if you’re like pretty much everyone else then all those years of gigs and clubbing have almost certainly caused irreparable damage to your hearing and you probably can’t hear the difference anyway.
So no, I don’t believe much in the mystical ‘warmer’ superior sound of vinyl. And making vinyl records even more of a pain in the arse is the fact that they require maintenance — and my two cats never cease to indirectly remind me of this fact. Hell, they cause the maintenance.
One’s a fluffy ginger long-hair and I am forever removing statically accumulated orange fur from records. Then, recently, I found the other one (at seven kilos he’s something of a fatso) actually sprawled out on the platter! I’m certain it’s not the first time he’s done it and I suspect he has something to do with the two or three hundred dollars I had to spend on repairing suspicious damage to the tonearm on my turntable. That, and he somehow managed to switch the damn thing on (I can just see the pro-digital brigade here, waggling their fingers as they dish out patronising reminders about how your cat would never log into iTunes and mess up your settings). 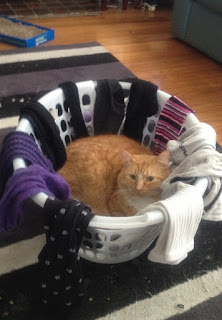 Yeah, he might look cute now, but when nobody’s looking he spreads his FUR everywhere.

Worse still, there’s the eternal risk of permanent scratch damage to the not-so microscopic grooves or even the risk of record breakage. And then there’s the problem with storage. A modest collection can take up a disproportionately large amount of a good bookshelf.
Indeed, who in their right mind would accumulate these things?
You might also ask why there are certain people who actively collect valve radios, hand-powered model aircraft, old woodworking tools and wooden boats, when in each instance a far more advanced alternative is readily available.
The people who love crappy-sounding valve radios and wooden boats that take months of painstaking labour to restore (I’ve heard of wooden racing skiff hulls that have as much 80 per cent of their timber removed during the 'restoration') do it for some weird nostalgic reason that inexplicably give them hours of enjoyment and satisfaction.
It’s fun.
And for that very same reason I love playing with vinyl records and fantasising I'm DJing somewhere else, nowhere near the masses of cat fur and expensive repairs and rapidly diminishing storage space.
The best analogy I can come up with is a comparison to the sport of flyfishing, a specialised and gentlemanly pursuit that takes years to perfect.
Yet behind the mysticism and cult following lies the fact that it’s really nothing more than a specific means of delivering an artificial lure to a fish — one which just happens to be far more challenging than other methods, according to fishing celebrity Steve Starling. There are many far more effective means of catching those fish but the flyfisher chooses the fly rod. It’s a self-imposed limitation that’s highly challenging. But its practitioners reckon it’s the most fun there is.
So too is it with vinyl records.
They’re light years behind current technology. They’re a costly pursuit. They take up space. And a proper DJ setup can be a raging pain in the arse to maintain.
But it'smuch more fun to do it that way.
Which really, if it’s anything but that, isn’t worth doing.
Plus, mechanical devices with moving parts are kinda coo. Except maybe valve radios.
Posted by Alternative and underground music at 4:12 AM